This year marks the 25th Anniversary of Oleg’s distinguished career as celebrity television and radio broadcast talk show host in the United States. When he landed his first broadcast job New York, he he also became the first Russian to produce and launch a string of television shows that have been broadcast domestically via several notable cable networks and affiliates in most major markets in the US, Russia and to many other countries around the world.

“I feel very lucky to have sustained the incredible longevity of my broadcasting career,” noted Oleg. “Every time one of my shows ended, I wasn’t sure if it was going to be my last one. Now, I’m celebrating my 25th Anniversary.”
“I’m just really happy I get to do what I love doing,” he attests. “I’m looking forward to starting another chapter in my journey and hopefully launching my first show English language shows for American television and radio in the near future.”

“Oleg Frish is one of the kind. He remembers the songs I did but I’ve forgotten them long time ago”.

Oleg Frish Has Interviewed Over 2000 Celebrity Guests On His Television Shows Over The Past 25 Years, Here’s A Few Of His “Time Out” was a popular weekly television news and entertainment program that Oleg Frish hosted and produced under his own production banner, Time Out Media in 2005. The Sunday evening show was broadcast on NTV – one of Russia’s leading television channels. The network’s programs were broadcast in 19 countries and reached some 50 million people. They also had headquarters in the US. 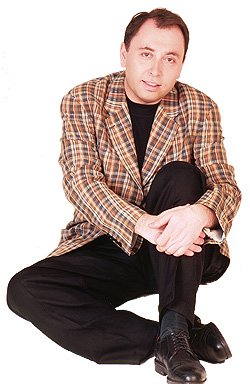 Oleg Frish is the Executive Producer as well as the Host of the program – a very bright and creative personality in his own right. Oleg has lived in the US for 15 years, all of them working in the Russian Radio and television. He also hosts a weekly music program on Wednesdays on Radio “VSE” -87.7FM.

In Russia, Oleg was a celebrity – an actor, a singer, a magician, and a journalist with his own unique show full of wit and whimsy, singing songs in 26 different languages and showing his enormous memory. He also wrote for the prestigious entertainment and cultural publications.

Oleg Frish was the first Russian reporter and host to start producing radio and television programs about famous American and European legends of jazz, pop and rock music from B.B.King to James Brown to Mireille Mathieu and Connie Francis just to name a few.

Gleb Savchenko was the first Host of “Time Out”. Before hosting this program Gleb lived in Moscow, Russia where he graduated from the Russian Theatrical Academy. He appeared in numerous music videos of major Russian pop stars, worked as a model and participated in ballroom dancing competitions.

In America Gleb has shot ad campaigns, appeared in such famous magazines as “Cosmopolitan”, “GQ” and “Men’s Health” and participated in major designer runaway shows. He also hosted concerts given by American stars in major New York venues and prestigious jazz clubs. Now Gleb Savchenko is doing well with his dancing and acting career and is happy with the opportunity for a new creative output he received in “Time Out” on NTV.

In America, Oleg was able to realize his dream by bringing to the Russian audiences and Russian market legendary names known all over the world.

“TIME OUT” IS ONE OF THE MOST SUCCESSFUL PROJECTS THAT OLEG HAS UNDERTAKEN SO FAR. NOT ONLY DOES HE HOST THE PROGRAM, BUT HE ALSO PRODUCES IT.

Now producer Oleg Frish has plenty to keep him busy – from working out the content of the show and looking for entertaining guests to putting together the right technical crews, working with editors, scheduling location and studio time as well as traveling to the most interesting and celebrated places all over the world to give the audience a look inside the fascinating world of entertainment, its celebrities and their lifestyles, their music and their art.

Interviews with Russian and American oldies singers and actors. Filmed in NY.

93 programs filmed in Moscow. Interviews with the most popular Russian/Soviet music, theater and film stars.